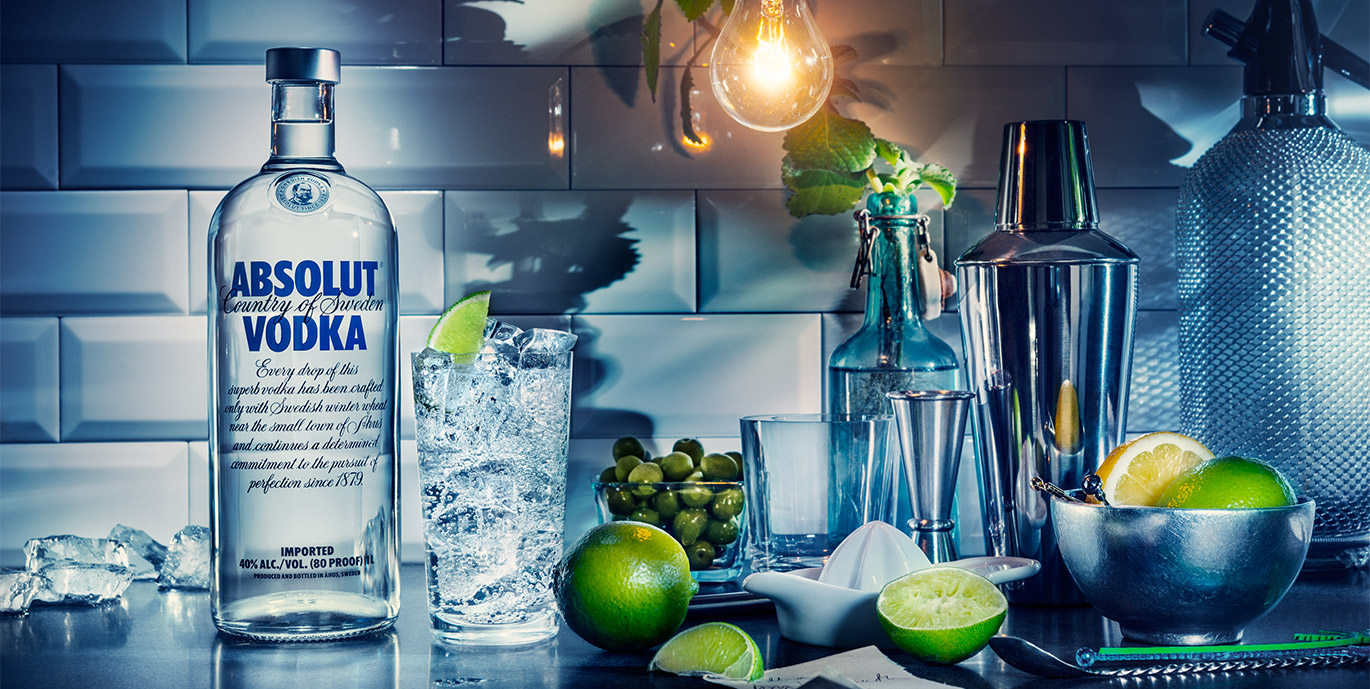 Absolut Vodka is one of the best selling white spirits in the world. It has a 40% ABV and it comes from Sweden. The recipe was created by Lars Olsson Smith 400 years ago. He managed to improve the distillation process of brandy and the production process of the Swedish vodka.  The product born from this process was called Pure Absolut Vodka.

In 1979 Absolut vodka began to be exported to the US, in a format similar to a medicine bottle. Soon after,Absolut Vodka became worldwide well-known, besides being one of the most widely sold in the market of alcoholic beverages, widening a lot its market quota.

Currently Absolut it's not just a drink, but also a collector's item. Bottles are so special that people collect them, especially the Limited Editions.

In addition to the bottles, one of the characteristics that distinguish Absolut Vodka from the other beverages is the variety of flavors. Among of many flavors we would like to highlight the following:

- Absolut Ruby Red: Created in 2006 with a flavor of red grapefruit. Perfect for those who like citrus and its flavor.

- Absolut Berri Açaí: With a natural flavor of açai, blueberries and Granada. It is an exotic drink perfect to prepare the best cocktails.

- Absolut Wild Tea: It is the most recent. It was created in 2010 with Chinese black tea combined with pure vodka. It also has special ingredients like elderberry flowers typical of Scandinavia.

- Absolut 100: This is the most premium drink of Absolut   . Created for vodka lovers in all its essence with a strong and intense flavor. In contrast to many other vodkas, Absolut 100 contains no added sugar. The style of the bottle is one of the most luxurious with a deep black color.

- Absolut Rasperri: Created in 2004, It has its Swedish roots deeply entrenched with a raspberry flavor, which is the typical fruit of the Nordic lands.

- Absolut Vanilla: Created in 2003 for the lovers of the unmistakable vanilla flavor.

- Absolut Citron: It is a good combination of lemon and pure vodka. It was created in 1988 and became popular because it was served with lots of ice and a slice of lemon. It is made from limes, lemons and lemon peels. The same mixture was made with mandarin orange, pear and mango to create Absolut Mandarin, Absolut Pears and Absolut Mango.

- Absolut Kurant: is the combination of grape flavor and vodka. It is a tribute to what that once was called Absolut Vinbar or "wine bar".

- Absolut Peppar: It is the first spicy vodka in the world and has a strong pepper flavor. These are two of the ingredients of the Bloody Mary cocktail.

- Absolut Apeach: Perfect for summer cocktails created with peaches and it is famous all over the world since 2005.

Of course each of these bottles has a different and distinctive design maintaining the colors of their ingredients and the line of the brand. Furthermore, Absolut occasionally creates limited editions for different events or dates. In these cases, the brand itself designs the bottle or the brans orders a designer or recognized character to do it.

In Affinity Drinks we export and import different kinds of alcoholic beverages. We have several Premium brands exported worldwide for different companies and customers that demand the highest quality. And of course we have the Absolut vodka brand in our list. If you want to make any order or you have any requests, visit our website or contact us.